You are here: Home / Everything Else / What the 2016 Presidential Election Means for Your Finances

What the 2016 Presidential Election Means for Your Finances 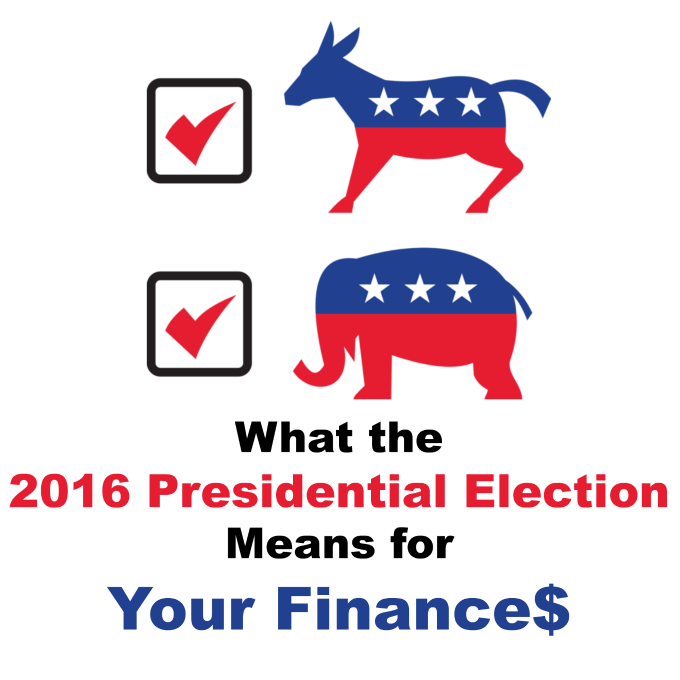 What the 2016 Presidential Election Means for Your Finances

We’re well into 2016 now and that means the election cycle is heating up. While there are many issues for a presidential candidate to address, most of us are very concerned with what the next four years could mean for our finances. Let’s look at three key areas.

Right now, a major issue with Millennials involves student loans. You have a generation of college graduates who took on serious debt to go to college, but they aren’t finding the types of jobs that make it possible to pay those amounts back.

As a result, many are looking to the next president to finally forgive people’s student loans.

Unlike almost every other form of debt, student loans cannot be discharged. This means that in the case of, say, a bankruptcy, the filer still needs to pay those loans back. Their credit card debt can be wiped clean. The same goes for their car payments. Student loan debt, though, won’t go anywhere.

While legislation was passed in 2013 that essentially required interest rates to become locked in for student loans (i.e. they can no longer be variable rates), that doesn’t do much for those who are already committed and haven’t been able to find relevant work post-college.

If this issue doesn’t get to the forefront of the 2016 election, expect it to play a big role in 2020. After all, as we just covered, that debt isn’t going anywhere and it’s probably a safe prediction that more and more Millennials will be looking for some relief.

Furthermore, there are still a lot of Millennials who are in post-graduate education. This means they haven’t even begun chipping away at their student loan debt yet. In fact, they’re actually adding a significant amount to it.

In a recent political survey, Clinton and Sanders scored well with Millennial voters. According to the survey, Sanders won 39.77% of the vote, while Clinton won 23.39%. In contrast, Trump won only 10.52% of the vote. While all of the current candidates have talked about addressing the Department of Education and both Clinton and Sanders have supported the idea of making public institutions free, none have actually said they would pass loan forgiveness policies.

Taxes are always toward the front of the line when it comes to election issues and 2016 won’t be any different. Here the candidates have plans we can actually look at, though that’s not to say that winning an election will mean their plan automatically comes into play.

Hillary Clinton has proposed 4% surtax to be added to anyone making more than $5 million.

Her Democratic rival, Bernie Sanders, wants to establish new brackets. These would land at 37%, 43%, 48% and 52%. That last rate begins with people making over $10 million. Each bracket would see a 2.2% hike in their rate.

Ted Cruz wants there to be a flat rate of 10% for all forms of ordinary income. The standard deduction would also be increased to $10,000 a filer.

As you can see, there are some pretty big differences across party lines, but even amongst fellow party members, their take on taxes differ greatly.

Ultimately, it’s hard to say what this will mean for you, individually. After all, it depends on your income. You also have to consider things like capital gains and estate taxes, something that would also be unique amongst voters.

Also, you have to factor in that election promises don’t always turn into reality. The cost of running the federal government doesn’t look like it will be going down anytime soon. Therefore, no matter who wins, there’s a very good chance your taxes are going up.

Despite what conventional wisdom holds, election years don’t really have much of an impact on the stock market. The only exception to this rule is when there’s some type of recession. Elections where there can be no incumbent also produce slight dips. Otherwise, they largely aren’t much of a factor.

Still, if you like to be especially cautious with your investments, you may be worried that the contentious tone of this upcoming election might cause some turbulence in otherwise calm waters.

After all, if non-incumbent races produce drops because people lack certainty in what’s going to happen next, this election could do the same thing to a much greater degree. No matter whom you intend to vote for, the race still seems fairly wide open and there are some real wildcards still holding strong.

Another reason to be less than optimistic: the past three years haven’t performed like they were “supposed to.”

The first year of President Barack Obama’s second term, the Dow hit an impressive 27% over the prior year. The second year, that number was 7.5%.

Last year, though, should have been the strongest showing yet. It wasn’t. The Dow Industrials instead surprised people by falling 2%. It’s too early to know what 2016 will bring, but if that last year is anything to go by, you may be wise to hold onto your hats.

Again, this is all speculation. The best move is to simply keep an eye on the stock market so you can react to any signs that things are getting dicey. Perhaps put your money into bonds or other safe investments. If you don’t already, now would also be a great time to hire a professional to monitor your money for you. This is not a good year to invest in your spare time.

Also, interestingly, the stock market usually has far more of an influence on elections than vice-versa. If the market is down during the last three months leading up to the election, the incumbent party will most likely be ousted. If the market is up, that party remains.

There’s no doubt about it: this election will change our country forever. Just how much it will get changed and in what ways, though, is anybody’s guess. While it’s unlikely any candidate is going to help stretch your dollar, their policies will definitely affect the three areas we covered above.