Recently WWE Superstar John Cena set a Make-A-Wish record granting his 300th wish to seven-year-old Jonathan Littman live on Good Morning America.  Cena is the only  celebrity to reach this milestone and if you view the video (linked above) you will see that he truly enjoys granting the wishes. It comes as no surprise that he continues to be one of the most frequently requested celebrity wish granters.  The WWE is no stranger to the Make-a-Wish Foundation as they have been involved with the program for over 25 years and have granted nearly 4,000 wishes. 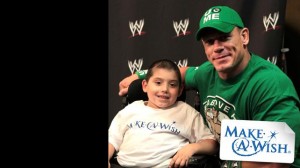 “That’s what’s special about what we do here in WWE. We offer excitement, we offer entertainment. We offer a positive atmosphere. To an everyday member of the WWE Universe, that is special when you’re a kid or a family that’s up against it,” Cena said.

“You can’t underestimate the power of positive thinking. It’s something as simple as that that maybe could get someone through a day.” 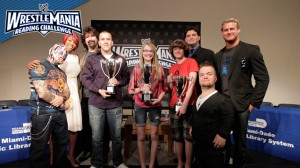 The program encourages teens and tweens to read during Teen Read Week and beyond. By doing so, they can win prizes donated by WWE and other organizations. The goal of this program is to reach reluctant readers and get more teens reading beyond Teen Read Week by implementing a reading incentive program that provides prizes from WWE as a reward.

In keeping with the spirit of literacy the @WWEmoms is hosting another twitter party with a grand prize of a Kindle Touch E-Reader.

Disclosure:  I have been hired by the WWE to facilitate the #WWEmoms Campaigns & this post is part of the obligation, but the opinions are my own and not necessarily that of the WWE.