On any given night you might see tweets coming through on Twitter about an upcoming Twitter Party. Unfortunately for people who are new to twitter it can be very confusing and frustrating trying to figure out how to participate.  I remember when I first started on twitter and all these strange tweets with weird symbols (#) were showing up on my twitter feed.  People were winning things and congratulating each other.  I was lost.  I wanted to play.  I wanted to win great prizes.  I wanted to share my ideas with all these people, but didn’t know how.

I think it took me about 3 months before I ever fully figured it out.  I couldn’t find any resources online that helped and finally some of my awesome twitter followers clued me in.  So, to keep in the spirit of helping others I am writing this post about “How to Participate in a Twitter Party” in hopes that you will share it with others.

What is Twitter?
According to their site Twitter “is a rich source of instant information. Stay updated. Keep others updated. It’s a whole thing. Customize Twitter by choosing who to follow. Then see tweets from those folks as soon as they’re posted.”

What is a Twitter Party?
A Twitter Party is a virtual party that takes place on the Twitter platform. Parties usually focus on discussion around a particular topic or brand. Additionally these parties are set up in advance by a host and the time and other details are outlined on a website or blog (here is an example of one of those posts). Although most parties are at night, there are some scheduled during the day. A party generally last between 1 – 2 hours and can generate thousands of tweets during that time. Depending on the parties theme or purpose there may be special guests or expert panelists present to answer any questions about the topic. Many times guests (tweeters) have an opportunity to win prizes by tweeting during the event using the designated hashtag.

What is a hashtag?
A hashtag is this # followed by a topic. Hashtags are predetermined by the host prior to the party. Any time a person tweets they follow up with #topic. This allows anyone following that particular hashtag to see their tweet regardless if they follow them on twitter or not. For example, if the party is about organization the hashtag may look like this #GetOrganized and every tweet you write to participate would end in #GetOrganized.

There are a bunch of websites that have information about hashtags. To read more check out HashtagDictionary.com.

What is a party host?
The party hosts are announced prior to the party. This is the main person (or people) you want to make sure you are following. The role of the host is to keep the conversation focused around the topic/brand. This is usually the person who is also giving away the prizes.

Anyone can be a party host and anyone can create a hashtag. However, running a party is not as easy as it looks. It is impossible for a host to answer all the tweets they receive during a party. Do not get frustrated with them if they do not return your tweet or answer your question directly; a host can get hundreds of tweets every minute or so depending on the size of the party. A good host will follow up with you after the party if you question isn’t answered during the event.

How do I win prizes?
This depends on the host. Some parties require you to sign up on a linky on a blog or website and winners are drawn randomly from the link. Other parties ask questions around the topic (watch the host’s tweets!) and either give out prizes randomly from the tweeted responses or award prizes to the Xth tweeter (or predetermined number). The Xth tweet that comes through in their twitter stream becomes the winner. It is sometimes required to tweet directly to a specific host when replying to questions, be sure to pay attention to the rules.

Note: As a general rule, the parties that award prizes to the first person to tweet the answer can be very frustrating to most participants and it is highly recommended not to use this strategy. Not everyone is a speed typist and some peoples internet connection isn’t as good as others.

Twitter Jail:
Being too social has it’s drawbacks.  Twitter jail is when you get locked out of tweeting for tweeting too much.  Here is a Twitter Jail 101 article to read more about it.

TweetGrid – Getting Started:
The TweetGrid platform is relatively straightforward.  Once you are on the site click the “Party” tab.  I usually choose the 1 x 3 option which gives me on row with 3 columns.  Since parties go by so quickly any more than 1 row makes it difficult to view tweets as they come through.

The screen below is where you fill in the information for the party.  First is the hashtag (ex. #TPRPchat), next is the host twitter ID (in this case there are two hosts, @ThePRPlace and @TPRPchat), finally you enter your own personal twitter ID (ex. @lisasamples).  Finally, click “Join the Party“. 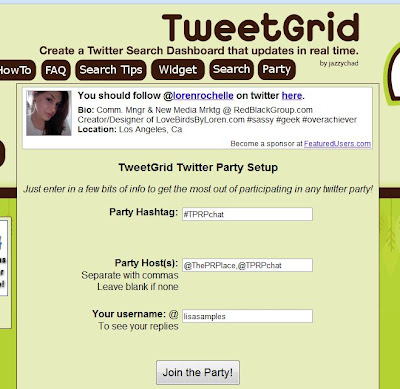 Along the top portion you will see a bar that says “Tweet”, this is where you type in whatever you want to contribute to the party.  The hashtag will automatically be attached to each of your tweets.  The first time you tweet  you have to fill out your twitter information so that TweetGrid knows who you are (example above).  Once your username and password are entered hit the gray “Tweet” button right under the bar where you typed your tweet.

Congratulations!  You are now interacting with other party goers!

More info on TweetGrid:
Here is what one tweet looks like on TweetGrid.  The little icons on the bottom right are not usually present when viewing your screen unless you hover your mouse over the tweet.  Here is what each of those do: 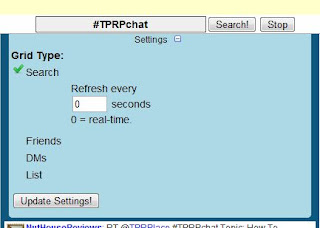 Each column of TweetGrid has a Search! and Stop button.  Remember, the tweets are quick and it is almost impossible to read them all. You will skim the tweets as they load through each column but if you ever want to stop the tweets coming in to read something that catches your eye, click the Stop button.  Once you read what you were wanting to read remember to click the button again to get the tweets you missed.  The Search! function allows you to search the stream for keywords.

There is also a +Settings (clicked the + in above example) where you can update how often you want to pull in tweets.  I usually keep mine on 0 so that I don’t miss anything such as an opportunity to win a prize. 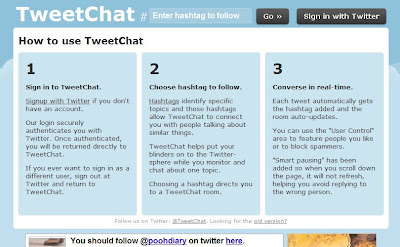 TweetChat is pretty easy and straight forward; however, it does not have as many tools as TweetGrid.  To sign on you have to be logged into your twitter account.  You enter the hashtag in the box at the top and hit “Sign Into Twitter” which will bring you to this screen: 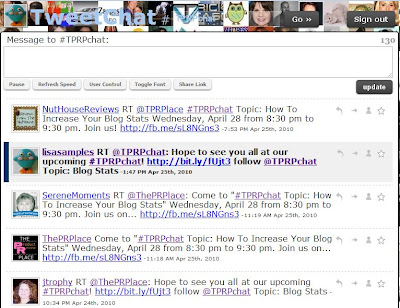 Does it look familiar?  Yes, it runs on the twitter platform similar to what you would find on your twitter.com page; however, it is somewhat different in that it pulls in all tweets with the hashtag regardless if you are following that person or not.

Along the bottom of the box where you type your tweet (again, no hashtag necessary because it adds it automatically) you will find the Pause, Refresh Speed, User Control (clicked in example above), Toggle Front, and Share Link tabs.  The Pause tab when clicked pauses the stream of tweets and the Refresh Speed is where you would set how often to refresh.  The User Control options are Feature and Block.  You can Block party spammers by entering their twitter ID and they will not show up in the party.  You would use the Feature to add the Party Host and your twitter ID.  This enables those tweets to stand out in the stream.  I don’t use the other buttons.

Now that you have the skinny on how to participate it is time to find some parties!  You can also sign up for our new Twitter Party Newsletter to find out about the BEST PARTIES AROUND.
Don’t forget to follow me @lisasamples on Twitter.
If you are interested in having a Twitter Party please contact lisa.samples@gmail.com for my current pricing.

This website uses cookies to improve your experience while you navigate through the website. Out of these, the cookies that are categorized as necessary are stored on your browser as they are essential for the working of basic functionalities of the website. We also use third-party cookies that help us analyze and understand how you use this website. These cookies will be stored in your browser only with your consent. You also have the option to opt-out of these cookies. But opting out of some of these cookies may affect your browsing experience.
Necessary Always Enabled
Necessary cookies are absolutely essential for the website to function properly. This category only includes cookies that ensures basic functionalities and security features of the website. These cookies do not store any personal information.
Non-necessary
Any cookies that may not be particularly necessary for the website to function and is used specifically to collect user personal data via analytics, ads, other embedded contents are termed as non-necessary cookies. It is mandatory to procure user consent prior to running these cookies on your website.
SAVE & ACCEPT
Google+