You are here: Home / Everything Else / Growing Pains: Home Technology Still Has Some Wrinkles to Iron Out

Growing Pains: Home Technology Still Has Some Wrinkles to Iron Out

Everyone likes the idea of a “smart home.” The problem is implementation. Ever wonder whether some of these smart appliances and systems live up to the hype? Well, as many consumers are finding out, many of them don’t. 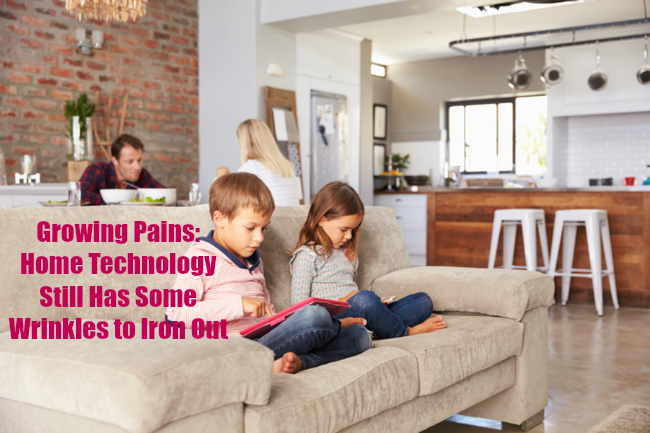 Here are some of the problems people are discovering and ways that they can be worked out.

While many people do love their home automation gadgets, some consumers are noticing that not everything is sunshine and rainbows. Individual products bask in the glory and praise of journalists and reviewers, but some consumer surveys by Support.com find that user experience doesn’t match up with what reviewers often say about these new fangled inventions.

While the perceived value of home automation tech remains high, consumers note major problems. First, there is the cost factor. Out of 3,000 consumers interviewed, 74% wanted the upgrade for entertainment value, with 46% wanting improved safety from their gadgets. Roughly 58% of potential buyers want energy efficiency while 47% want convenience.

The main issue facing consumers was cost, both in terms of hard dollars and cents and time. Roughly 42% said that the price of installation and maintenance was a major concern. Roughly 79% said that the cost of purchase, setup, and configuration was a turnoff. And support issues after the fact frustrated another 31%.

Nearly half of all buyers surveyed wished that they could buy from a single seller who did installation and support.

Bottom line: The complexity of configuring a product, especially smart home systems, continues to frustrate users and dissuades potential buyers. Cost remains another key issue, as does the servicing of the product or service after the fact.

Many new homes already come with a lot of the smart features homeowners want, which is why some consumers find it easier to just upgrade their home. For additional info see Spencers online here.

For more than 150 years, inventors and businessmen have been trying to perfect home lighting. But, it was Thomas Edison who patented the light bulb and made it a reality for millions of people. Since then, lighting advancements have moved at a snail’s pace. There’s not much to improve upon in the basic incandescent bulb. And, the improvements that are possible tend to be quite expensive.

But, be that as it may, manufacturers have managed to come up with interesting iterations on the basic bulb. Compact fluorescents changed the way people looked at home lighting. And, today, LED bulbs are changing how we think about energy usage.

What used to take 100w to light a home now only takes 10w to 13w for the same light output.

But, just to up the ante, Philips Hue LED Lighting System takes the LED idea and adds Wi-Fi. Now your bulbs can be switched on and off using your smartphone.

Older HVAC systems are controlled by a manual thermostat. Traditional thermostats work because there are two pieces of different metals bolted together. Combined, they’re called a “bimetallic strip.” The strip works sort of like a “bridge” in an electrical circuit. Normally, the bridge is “down” and the strip can carry electricity through the circuit. When you turn up the heat, the bridge stays down and an electrical current is allowed to pass over the bridge, which activates your heating system.

Newer systems, like Nest, completely replace your old thermostat system, and can help “upgrade” several aspects of your home. With older programmable thermostats, you could set a predefined temperature and cycles, and your thermostat would control the HVAC. But, the most advanced smart thermostats, like Nest, can intelligently monitor how hard your HVAC is working and then optimize usage for your comfort while minimizing wear and tear on the system.

For example, your smart thermostat can monitor the AC usage, and then shut off the unit when the system senses that air circulation could keep the house at a cool temperature without using more energy. The result is that you save money on your cooling bill without sacrificing comfort.

From T.V.s to game consoles to computers, the history of entertainment is far-reaching. Modern entertainment systems tend to focus on energy usage, with “smart power strips” that shut off when it doesn’t sense human movement for 30 minutes. Or, systems may incorporate low-power modes at night or during times when the device things you may not need “full power” or advanced settings.

Irma Barker is a customer service assistant for an electronics retailer. Often one of the first to see the new smart technology coming onto the market, she also has to help consumers with any tech related problems.