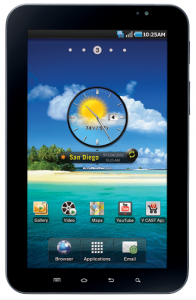 The Samsung Galaxy Tablet by Verizon Wireless has been a blast to play with over the past week and a half.  I’ve been behind the times.  I don’t own a Droid.  I don’t own an iPhone.  I don’t own an iPad and there is almost NOTHING smart about my current phone.  I’ve seen tons of posts on blogs, tweets on twitter, and entries on Facebook about cool apps and other tools but until Verizon gave me the Samsung Galaxy Tab I haven’t been able to experience any of this first hand – except for the few times my husband let me play on his Droid X.  For the record – I’m due a phone upgrade next month so stay tuned! 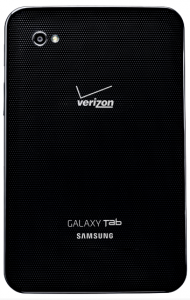 The size (7″ display) was refreshing on  my eyes and everything was the perfect size to eliminate eye strain.  Granted we can use our smartphones for a lot of the same functions, but the screens on our phones aren’t conducive of anything other than a quick email, tweet, or check-in on Facebook.  The display area on phones make it harder to browse and definitely more challenging to type.  I did notice the Samsung’s touch screen was very accurate with my stubby fingers and errors were minimal.

The TFT display with WSVGA 1024 x 600 resolution & full touch–screen has a bright and clear display for the ultimate viewing experience. 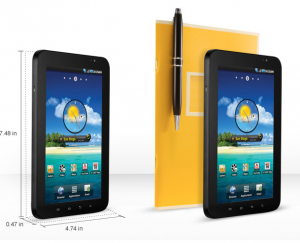 I also loved the long battery life.  I was able to play on the Galaxy Tab all day without having to worry about charging it.  I’ve been using it now for about a week and haven’t installed a lot of apps yet, so time will tell once I give it a real workout.  I have used some of it’s features though such as the VZ Navigator®.  With the large display this GPS alternative was much easier to track than my small screened TomTom.  Here is a list of some of the Verizon services available with the Samsung GALAXY Tab.

Next Tuesday I’ll share more information on the GALAXY.  If you are thinking about buying one I would love for you to list your questions in the comments and I’ll test it out this week and include my findings in next weeks Techie Tuesday post.  If you are looking into purchasing one they are normally $499 and with a 2-year contract are available for $199.  This is an extremely great price compared to other tablets on the market!

Disclosure:  I was given a Samsung GALAXY Tab by Verizon in order to facilitate my review.  My opinions are my own.