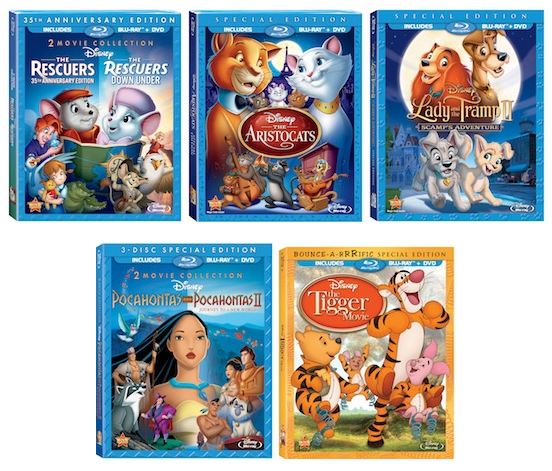 Disney was a very important part of both my son’s childhood.  My oldest son had every Disney movie that was released between 1993 and 2001, all on VHS.  My younger son  watched his brothers VHS films for as long as they held up and then started collecting DVDs from 2004 until 2011.  Now in 2012 we have started our Blu-ray collection (and hopefully I will share these with my future grandchildren – very far into the future that is).  This past month Disney released a bunch of great hits and we were able to grab them all, including The Tigger Movie, my absolute favorite.

On August 21st, Disney released 5 enchanting titiles on Blu-ray:
From now until September 30th if you buy any 2 of the Blu-ray combo packs above (excluding Cars 2) you save $10!
It is totally different watching a Disney classic in Blu-ray.  I can’t imagine it getting any more real than sitting there watching the animators work live.  Not only is video impeccable, but audio can’t be compared to the old VHS.  I’m looking forward to the next batch of Disney movies already!
Disclosure: We received all these awesome movies!