You are here: Home / Everything Else / Childhood Memories Trick or Treat 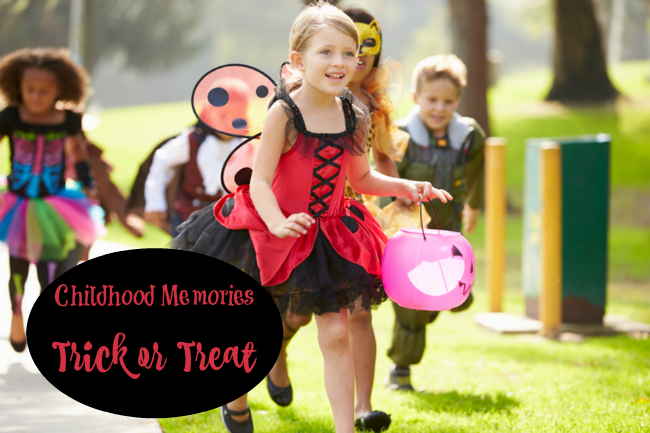 Without giving away too much information about exactly how old I am let me tell you what it was like when I was 5 years old.

I walked to school in the city of Albany, NY, without an adult.  I can’t remember exactly where we lived now, if it was Willet Street or Lincoln Street but I remember it was cobblestone. I remember a lot of different things about it but I think I get them mixed up since we lived on both streets at one point or another and they were so close. Maybe it was Jay Street. Anyway, it was a while ago. As I was saying, I walked to school every day.  Not one-way, up a hill, with no shoes in the snow; however, I walked a long way for a little girl in Kindergarten. I would say it had to be at least 10 blocks. I remember the crossing guard and how she used to say how adorable I was. I was.

When we were in school we didn’t have the rules that schools have now. We were allowed to do a lot of things that would NEVER work today. We were allowed to wear our Halloween costumes to school every year, no matter WHAT the costume was…because when I was young no one thought of dressing up as a sexy nurse or a psycho killer. We all bought those same old costumes with those terribly itchy masks that were nearly impossible to breathe out of  and the cheap, easily ripped material that went over your clothes and tied in the back. I think I might have been Wonder Women more times than not back in those times.

I’ll never forget the time when Halloween fell during the week and not on a weekend and I was all dressed up to go to school. It was Halloween! So why was everyone so confused when I rang their doorbell and shouted “Trick-or-Treat” when they came to the door? No one ever told me I couldn’t trick or treat before school. House after house and door after door, people would answer to my tiny little knock at 7:30 in the morning with a look of surprise. But I was cute, the crossing guard told me so. She must have been right because I got more candy that year than any other.

For more fall memories, visit a few of my favorite bloggers:

Would your brand like to participate in #FallFun31? Fill out this form for more information.